In 2019, the fest was lush and colourful. Many people from near and far honoured us and enjoyed the magnificent Valya Balkanska and Petar Yanev. There were guests who especially came to hear the charming Avigeya. For the third year in a row, we watched in delight theater under the stars – the folk comedy Vidovden by Vasil Vasilev, presented by the troupe of “Razvitie 1898” community centre  – Oreshak. Many Rosemary DeMeo fans and future ones enjoyed a personal conversation with the author. Children painted and turned pots on a real potter’s wheel. There were homemade natural goodies, kebapcheta for the hungry and the most delicious kurban soup, prepared by Tsanko Draganski and Gitza for the wellbeing of all residents and guests of the village of Stefanovo. The mayor Ivan Dzhurov greeted everyone with a very human and genuine speech and thanked those who helped with the organization. A real village fest. To preserve and pass on our traditions and Bulgaria to last! 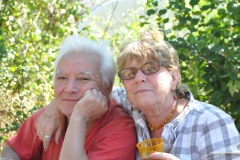 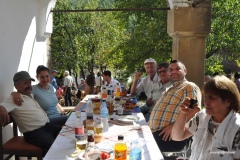 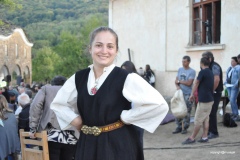 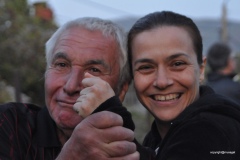 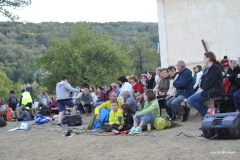 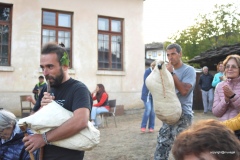 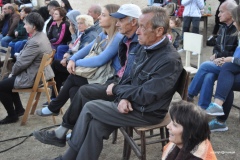 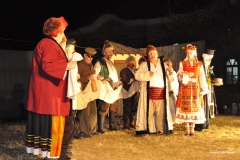 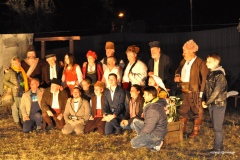 On September 22nd 2018 the fest was under the motto “With the traditions Forward”.
Trio Vecernica and Ekaterina Angelova, performed authentic folk songs for us, and then Avigeya performed folklore with a slightly younger sound. The musical program ended with a pleasant jazz by Georgia Pavlova, Stanislav Arabadjiev and Stefan Zdravesky.
There were stalls with homemade jam, chutney, goat’s cheese, fulled wool, and Sue’s cupcakes. At the children’s corner there was painting on pebbles and pieces of wood. You could buy Rosemary DeMeo’s book “Lord’s Mistress”. We planted a Ginkgo Biloba tree, a gift from Tvoritelnica O”Pismeneh.
There was German beer for the thirsty, provided by the Bremme family, for the hungry hot kebabs and meatballs, and a delicious traditional rite kurban soup, prepared by Tsanko and Gica.
At the end of the evening, the Oreshak village troupe presented with great enthusiasm the play “The Fire of the Hoard” and left us thinking.

In 1909 two educational societies “Paisiy” and “Hristo Botev” were established in the village of Vratza (present-day Stefanovo). In 1928 there were also two community centers “V. Aprilov” and “Saglasie”. At the suggestion of the teacher Geno Manoev, they unite in one chitalishte (community center) “Saglasie”.
Its most prominent leader over the years is the longtime teacher Radoy Stoyanov Minkovski, passionate conductor, musician, theater lover. He founded a theatrical troupe, ensemble for folk songs and dances, educated musicians in note reading and created a brass band orchestra. Under his direction, many plays and concerts were presented and numerous awards were won.
After a series of nuisances, the chitalishte (community center) is functioning again and this year we celebrated its 90th anniversary.

18 February 2018 – “Saglasie – 1928” Chitalishte (community center), Stefanovo village continues a tradition, started more than 20 years ago by Stoyan Minkovski, Ivan Dzhurov and Boris Georgiev. Laying flowers at the place where in 1870 Vasil Levski founded a revolutionary committee in the then village of Vratsa (Stefanovo now).

22 September 2017 – „From grandma’s and grandpa’s hands“ fair in Stefanovo. Veselin Marinov fulfilled his dream to sing under the apple tree in the church yard. His fans enjoyed their favourite songs.

The new old library was reopened. After many difficulties the library was organised and awaits its readers.